Last week, on the 3rd and 4th of November, more than 60 academics, practitioners, and students from around South Africa gathered at the Stellenbosch Institute for Advanced Studies (STIAS) for an open science dialogue on the “Seeds of a Good Anthropocene: A Southern African Perspective”, organized by SAPECS and the Centre for Studies in Complexity.

The Anthropocene is a new planetary era in which the extent of human impact on the Earth and its systems has come to rival the great forces of nature. There is growing recognition that dramatic socio‐cultural, political and technological changes are required to achieve a “Good Anthropocene” – a future that meets the deeply intertwined developmental and environmental needs of society.

“There are good reasons for suggesting that the modern age has ended. Many things indicate

out and something else is painfully being born. It is as if something were crumbling, decaying

and exhausting itself, while something else, still indistinct, were arising from the rubble.”

The Stellenbosch science dialogue aimed to challenge participants’ thinking around profoundly different futures for humanity and the environment, especially from a southern African developing-region perspective. The point was to think beyond the widely-popularized “Doom & Gloom” scenarios, and to identify hopeful “Seeds” that are emerging to create a more desirable future for the planet in the Anthropocene.

Linked to a larger global “Seeds of a Good Anthropocene” initiative under the auspices of Future Earth, co-led by ecoSERVICES and the Programme on Ecosystem Change and Society (PECS), the Stellenbosch dialogue was an exciting start to the international process of identifying Seeds and discussing the meaning and characteristics of a Good Anthropocene.

Every participant of the science dialogue had to submit a description of what they thought was an example of a “Seed of the Good Anthropocene”, and on the basis of those submissions the organizers were able to group the Seeds under seven main themes:

Examples of Seeds ranged from global social movements like Transition Towns, to more local partnerships and initiatives like the Cape Flats Nature project, to a shift in attitudes like accepting insects as a major protein source in our diets.

Group discussions around the seven Seed themes formed a large part of the dialogue, with the addition of provocative “Food for Thought” presentations peppered throughout the two day workshop. The invited speakers of these truly thought-provoking and sometimes foundation-rattling talks were:

Together with many informal sessions around coffee and cocktails wonderfully catered by STIAS, these Food for Thought sessions shaped an interesting learning process for the participants. As they delved deeper into their own mind-sets, there was a growing realisation in the room that discomfort was as much a part of the game as “rose-tinted” views of the future. The multiplicity of perspectives and viewpoints led to a rich discussion that was captured not only in written notes, but in pictures by graphic design student Peter Chantler (see examples below), an “Ideas Wall” where everyone was free to write whatever was on their mind, and a Twitter conversation that extended beyond the workshop to all corners of the globe (#GASeeds).

The following day, on the 5th of November, a synthesis workshop was held with a smaller group of researchers to work through the many creative ideas and connections that surfaced during the open dialogue sessions. To capture these insights, a report will be produced and published on this website, so watch this space!

UPDATE: Download the process and evaluation report of the Open Science Dialogue, compiled by Tanja Hichert!

PECS – Seeds of a Good Anthropocene

SAPECS YouTube channel with videos of the “Food for Thought” presentations 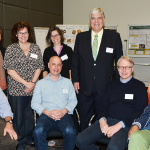 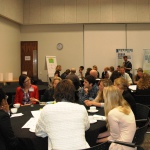 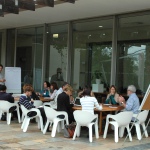 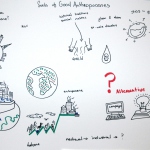 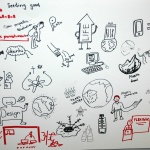 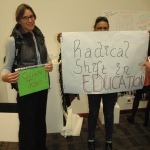 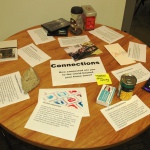 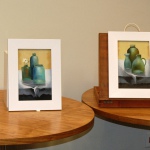 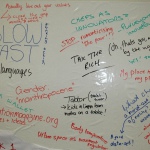